"Seditious conspiracy is an instrument to criminalize political contestation," explains attorney Bret Grote, director of the Abolitionist Law Center, in Pittsburgh, Pennsylvania, organization dedicated to pressure for changes in the criminal law. "The seditious conspiracy does not require the material proof of crimes; therefore people are convicted for criminal intent."

This law was the reason why the community leader Oscar López Rivera was sentenced to 55 years. He has been imprisoned since 1981. The major crime for which he was tried for was to have participated in the Armed Forces of National Liberation, a separatist group of Puerto Rico, his birth country, by many historians considered a kind of North American colony, although benefiting from the status of an autonomous state.

A Vietnam hero, awarded with the Bronze Star Medal, Rivera can’t be effectively connected to any proven offense, but his association with a separatist party was enough to make him languish behind bars.

Few of the 54 political prisoners still have the possibility to appeal, even though many may restate, year after year, requests for parole, which are routinely denied.

Those who were convicted by state judges would also be eligible for a pardon of their sentences by the respective governors. The federal prisoners depend on the good will of the President, who can’t interfere in states' decisions.

However, an iron curtain hides the saga of these men and women. 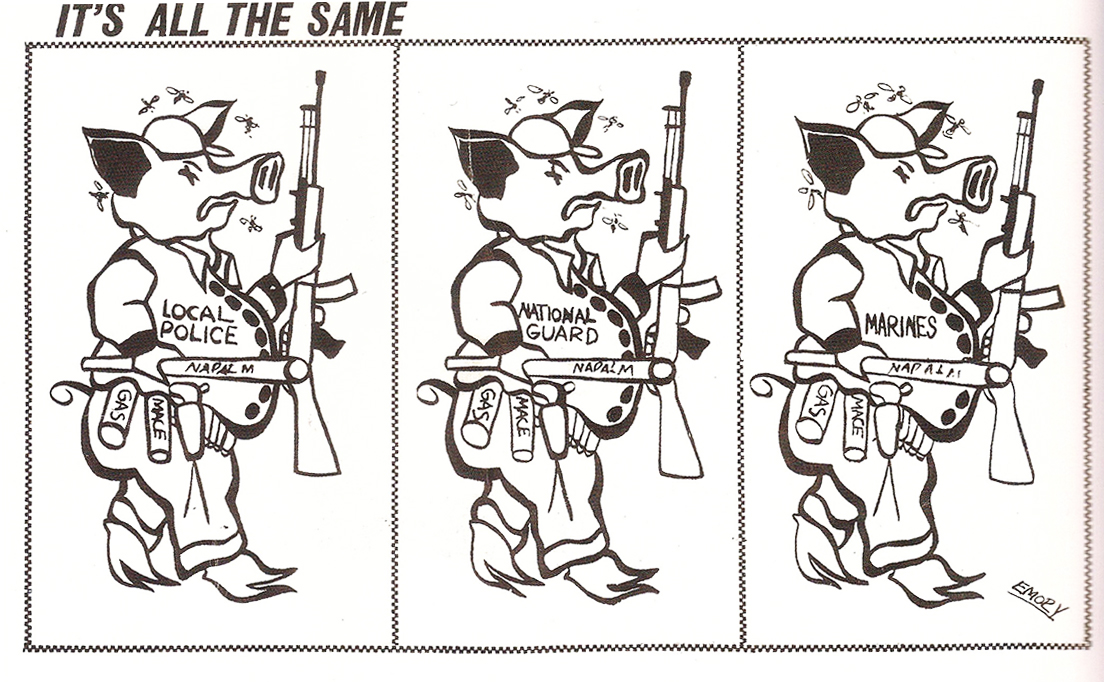 The cartoonist Emory Douglas, a member of the Black Panthers, used to ilustrate the party's newspapers

Everything got worse after the 2001 attacks and the declaration of the "war on terror", with the adoption of the Patriot Act, which further weakened the legal safeguards suspects of operating against the state had.

New waves of prisoners, mostly of Muslim origin, were thrown in jail alongside the old imprisoned fighters.

The Justice Department, insistently contacted by Opera Mundi, promised to give its version of the events, but preferred to remain silent and said, through its spokesman, that it had no interest in talking about the matter.

It is important to notice that “nothing to declare” has always been the preferred response of governments that wish to conceal the brutality of the violence they practice or cover up.